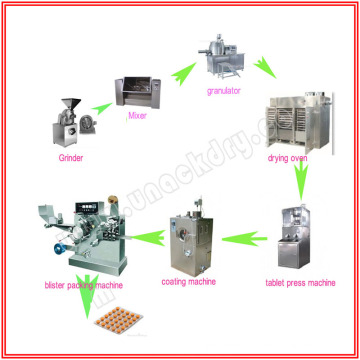 Meaning
Because tablets have accurate measurement, content uniformity, stable, easy to carry, transport, high degree of mechanization, large output, easy to take and so on, so the tablet is a modern pharmaceutical formulation of one of the most widely used forms. Production, including tablets, "said the material - granulated - tablet - coating - Packaging - boxing - storage" seven major steps. Tablet production line required pharmaceutical equipment together, so that a chain, will greatly enhance the efficiency of the production of tablets.

Provision
First, the drug and excipients mixed. Containing a small amount of the drug or poison, tablet drama drugs should be used appropriate methods of drug dispersed uniformly.
Second, Where volatile or light and heat labile drugs in the production process should be sunscreen, avoid heat, to avoid component damage or failure.
Third, the material or granules before tableting water should be controlled in order to meet the needs of production process, the tablets during storage to prevent mildew, deterioration.
Fourth, lozenges, oral patch, chewable tablets, dispersible tablets, effervescent tablets, etc. may be added as needed, flavoring agents, coloring agents and additional flavoring agents.
Fifth, to increase stability, mask the bad odor of drugs, improve the appearance of the tablets, etc., can be coated tablets. Sixth, the complete tablet should look smooth, uniform color, have a suitable hardness and wear resistance, except as otherwise provided, for non-coated tablets, tablets should meet the requirements friability test method to prevent packaging, transport process the worn or broken. Seven, the tablet dissolution, release, content uniformity, microbial limits shall comply with the requirements. If necessary, the film-coated tablets should check the residual solvent.
Eight, except as otherwise provided, the tablets should be sealed.

From the late 19th century, the tablet has been widely used and has been well received, to the late 19th century with the advent of tablet devices and continuous improvement, production and application of the tablet has been rapid development. Over the last decade, tablet production technology and machinery and equipment also have a larger development, such as boiling granulation, direct compression tablets whole, semi-film coatings, new materials, new technology and so on. In short, the tablet has become one of the varieties, yield, versatile, easy to use and storage, quality and stability, a tablet formulation in the total amount of Chinese Pharmacopoeia and many other countries that were contained in, account 1/3, showing the breadth of application. Contact us if you need more details on Tablet Production Line. We are ready to answer your questions on packaging, logistics, certification or any other aspects about Tablet Press Machine、Tablet Making Machine. If these products fail to match your need, please contact us and we would like to provide relevant information.